I’m trying to fill some gaps in, and confirm my understanding of HTM’s details, so I have a few very basic questions about the spatial pooler:

I do believe that is it for now

. I think I have a reasonable general, high level understanding of the theory behind the spatial pooler, but there’s just several details I am not quite sure about.

Does the spatial pooler have any role in finding patterns between multiple input fields? For example, if I have field-1 and field-2, and I encode them each into binary vectors, then concatenate these vectors and feed them into a spatial pooler, does it find spatial patterns between them? E.g. does it learn that when field-1’s value spikes, that field-2’s value dips? My current understanding says, yes, it does; but I’m having some difficulty putting into words exactly why that is the case…

One of the NuPIC encoders is called MultiEncoder. I think that is exactly what it does (flattens the multiple fields into one input).

Hi Hopding, you have a good understanding of the SP. I’ve addressed a few of your questions below. For the rest I recommend taking a look at the BaMI section for the SP algorithm, an updated version from the original CLA whitepaper.

@rhyolight Thank you Matt! I’ve looked into the MultiEncoder and it has been helpful

@alavin Thank you very much for taking the time to write such a detailed reply and addressing all of my questions! You’ve cleared up much of my confusion

I did find the time to watch that video of Chetan’s presentation - it was fantastic! I hadn’t come across that video before, but it certainly does a great job of going through many of the SP and TM details, very helpful.

I’ve read the HTM whitepaper, but I’ve only started on the BaMI. I wasn’t aware there was a Spatial Pooling chapter already for it. I’ll be sure to read through that as soon as I can and I’m sure it will enhance my understanding. Thanks again @alavin!

The current SP chapter of BaMI covers the algorithm and implementation, and I’m writing the next version now to add discussion on SP concepts, applications, and examples. Spatial Pooling questions from you and others in the community help guide me on material to include, so thank you.

I’m coding for Spatial Pooling. I have a 400x200 sdr type matrix. This matrix actually contains an encoded binary score word embeding.
I assign my input vectors to dense values.
Do I apply each data row by row for spatial pooling in HTM.core? Or you’ll use the whole matrix in bulk (2-D) in spatial pooling to pass to the temporal stage. I keep reading articles.
Can you help with the coding steps?

My results are as follows.
Note: A small example coding here is the matrix 44x16 size. And I assigned all lines to input in 2D. 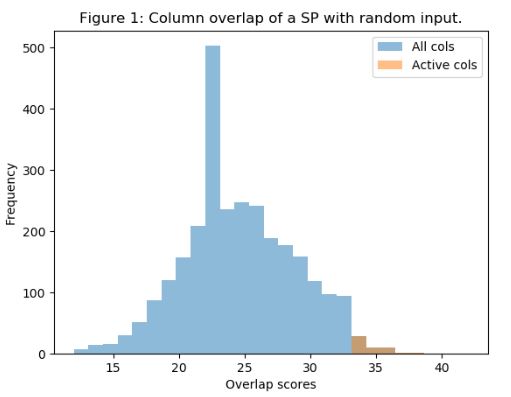 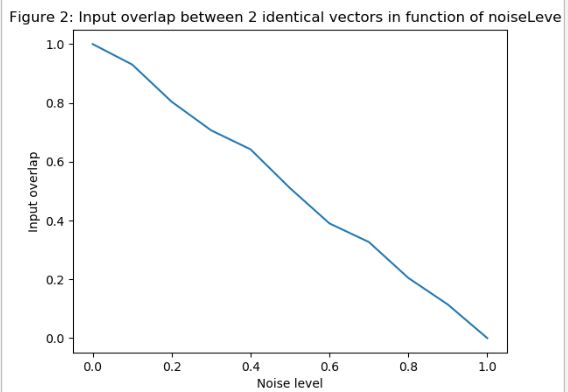 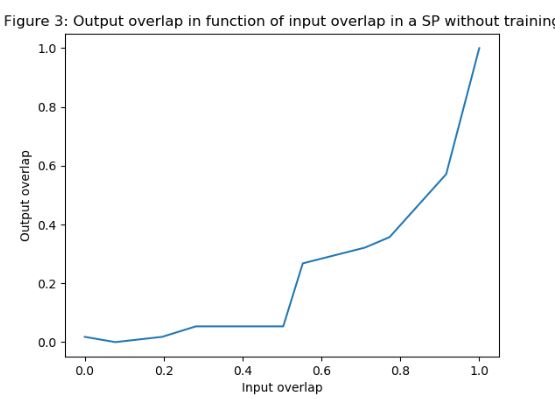 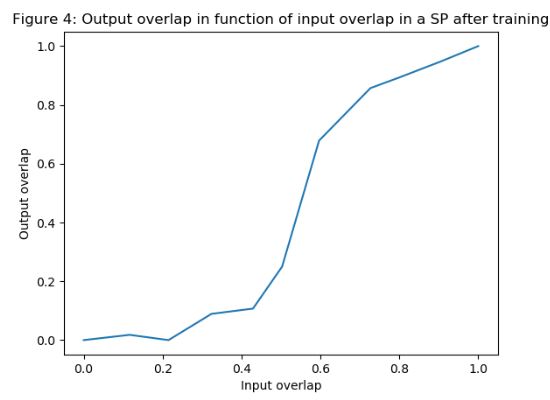 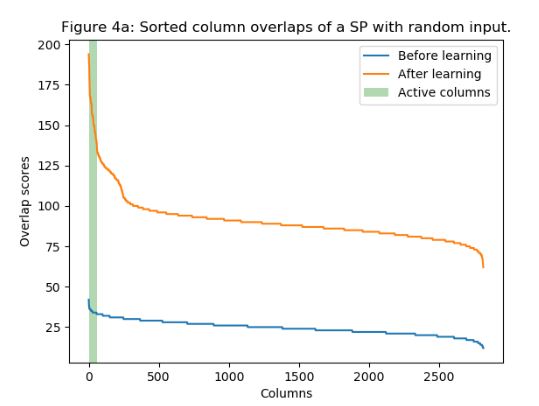 Do I apply each data row by row for spatial pooling in HTM.core?

HTM is at its core a temporal memory system, so yes, every data is processed one row at a time. Synaptic weights and connections may be mutated at each time step.

Or you’ll use the whole matrix in bulk (2-D) in spatial pooling to pass to the temporal stage.

Are you saying that the input has a 2D topology? If so, you must create a 2D topology in the SP as well. Watch this video first: HTM School Episode 10: Topology

It is hard to tell what your graphs are saying without understanding more about the semantics of the data. 400x200 is a pretty large input vector. How many minicolumns are you using?

Are you saying that the input has a 2D topology? If so, you must create a 2D topology in the SP as well. Watch this video first: HTM School Episode 10: Topology

Thanks for your reply.
Actually there is an sdr (1d) forms for each word. Each sdr contains 200 bits. It makes 8000 bits for 400 words.
We calculate each of them separately for each word.
otherwise, all the input matrix (2d-400 * 200) for the sp active output is calculated. The graphs are given for a small example
.

Ah, ok, then definitely use global inhibition in the SP (no topology). So input space to the SP is 200 bits.

If you are going to run the SP and TM, we usually run them both simultaneously and let them learn together. Are you finding anything unexpected in your graphs?

Are you finding anything unexpected in your graphs?

oh sorry. I don’t expect any results and graphics for now

I experimented on a small corpus. I have to work hard. Maybe I’m testing wrong way. So I wanted to ask you.

so I’ll run sp and tm for each word.
Finally, I complete the process by classifying.
Thank you so much.

Can I use subsample values ​​for these randomly generated variables?
Thanks.

I’m sorry, but I don’t really understand what you are doing. Maybe someone else gets it and can help me understand.

There is a py file named sptutorial in htm.core. At the end of those codes there is numexamples variable. And this variable is randomized. Can I generate subsample values ​​for the original sdr instead of these randomized values? 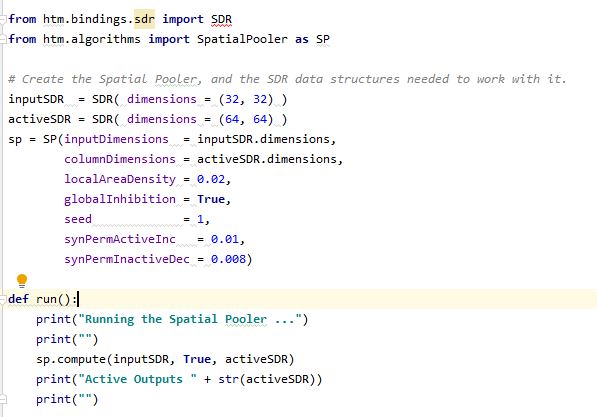 According to the above code, is a minicolumn value calculated with each compute() function? According to this code, how do I get the temporal memory input value?

My application and results are below.
Is “outputSDR” the input value for TM? Is the minicolumn length equal to “outputSDR”? 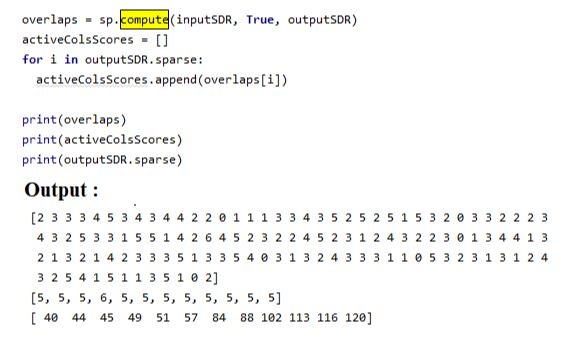 yes. The lengths are the same.

This is the core part you wanna see I think:

Concatenate all these encodings into one large encoding for Spatial

Create an array to represent active columns, all initially zero. This

will be populated by the compute method below. It must have the same

dimensions as the Spatial Pooler.

Thank you for responding.

This is the core part you wanna see I think:

Thank you.Yes. Of course I have to try those codes. Very successful. It will help me a lot.

Concatenate all these encodings into one large encoding for Spatial

There’s a “sdr” for every word. These words are actually a vocabulary piece. I created a subsample for each.
And I’ve run the compute function for each subsample.
You mean “Concatenate all these” for the subsamples each word. Then should I use the SP output of each word as the Tm input?