As mentioned earlier, predictions are not just for the next time step. Predictions in
an HTM region can be for several time steps into the future. Using melodies as
example, an HTM region would not just predict the next note in a melody, but might
predict the next four notes. This leads to a desirable property. The output of a
region (the union of all the active and predicted cells in a region) changes more
slowly than the input. Imagine the region is predicting the next four notes in a
melody. We will represent the melody by the letter sequence A,B,C,D,E,F,G. After
hearing the first two notes, the region recognizes the sequence and starts predicting.
It predicts C,D,E,F. The “B” cells are already active so cells for B,C,D,E,F are all in one
of the two active states. Now the region hears the next note “C”. The set of active
and predictive cells now represents “C,D,E,F,G”. Note that the input pattern changed
completely going from “B” to “C”, but only 20% of the cells changed. Page 25

I am wondering about how a region achieves this. It has been made clear exactly how one-step prediction is achieved, but it would be interesting how a region can predict an arbitrary number of steps into the future.

I have a vague memory that it is achieved through temporal pooling? Something like an SDR is layer 3 remains stable because it is associated with all the TM SDRs of a sequence in layer 4? Then that stable representation is projected back to layer 4 to make the multi-step prediction.

Maybe I’m missing something in the paper that explains this, or maybe its still just a high-level theory?

Older versions of the HTM whitepaper had a step in TM which allowed connecting with earlier timesteps (I don’t recall the exact implementation off hand, I’ll looked it up from my notes later if you are interested).

Personally, I think this is a function of a temporal pooling layer, as you mentioned. If you think of a sequence as an object, apical feedback of that object represented in a pooling layer cause all the elements of the sequence (or section of the sequence, depending on the pooling implementation) to become predictive.

I am curious about this too. I know there’s a parameter in NuPIC for number of steps into the future to predict, but how does this work currently?

Cheers, that seems like a pretty simple method. Though probably just using that until a biologically inspired method replaces it.

It’s important to remember that multi-step predictions produced in this manner of following out states of prediction in time defined by the network’s current lateral dendrites represent a compilation of possible futures. If multiple possible futures are likely in a signal, they will all be predicted on the same SDR.

However, in my own research, counter-intuitively, I have found that the ratio of predicted columns often falls to 0 upon high-order prediction->activation transitions instead of accumulating to 1. I presume this is because of the vast combinatoric complexity of cell to cell connections requires a highly learned and plentiful population of lateral dendrite connections to produce meaningful high-order transitions of predicted state.

I’ve attached two plots from my research which illustrate plunging prediction density in high-order transitions as well as it’s effect on prediction error statistics. When “thresholding on density,” I am enforcing a column-wise prediction SDR density of between 2% and 10%, and simply throwing out anything that doesn’t fall within those bounds. 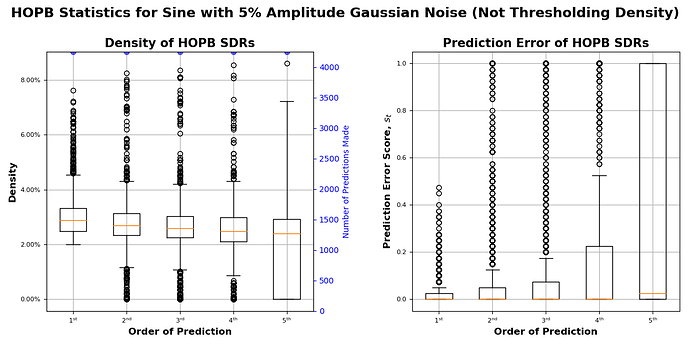 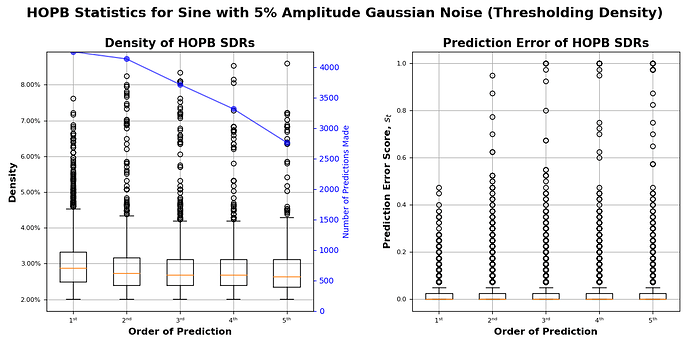