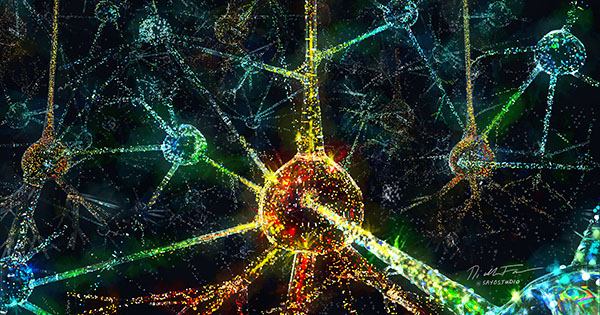 Why Do We All Feel Touch Differently?

Here is the full paper:

Information processing in the neocortex is carried out by neuronal circuits composed of different cell types. Recent census of the neocortex using single cell transcriptomic profiling has uncovered more than 100 putative cell types which subdivide...

“Our findings essentially uncover that there is a dedicated circuit composed of specific cells in the catalog that we call hub cells. These cells help to alert the brain that you’ve come across a salient feature that needs to be investigated further.”

He was specifically talking about neurons that match input to salient prediction (presumably apical), as in HTM. But that is supposed to happen only in those hub cells, not in “normal” neurons.

The normal neurons might be doing the opposite: combining appical error / novelty feedback with an input, as in conventional interpretation of predictive coding. They fire if significant input pattern is not expected?

So, those “hub cells” inhibit surrounding non-hub cell. Which means the latter are silent when prediction is accurate, but may fire if they get strong unexpected basal input. This is what I mean by classical predictive coding, vs. the one in the hub cells, modeled by HTM.

I’m intrigued by how the thalamus is also connecting into this region, and whether or not, and how, there might be interplay from that.

The thalamus is an often overlooked part of the brain, but over the last few decades, scientists have discovered a wealth of information about it. This blog post will cover how the thalamus works and the surprising but critical role it plays in...

That study is on primary somatosensory cortex, but I assume that this separation between hub / surrounding cells applies across the cortex. It seems to provide a neat mechanism for separation between supervised and unsupervised learning. I think the latter is currently neglected, including in HTM. Not sure thalamus plays any specific role here, it looks like a basic L2/3 mechanism.

Novelty seeking?
I expect that there is a drive like being hungry or thirsty that motivates us to create a certain degree of bursting in the cortex. That is - whatever mechanism that generates a learning signal in the cortex.
The more of the cortex that is involved the more reward is generated.
I don’t have any research to point to for backup on this - it just fills a theoretical need in the behavior repertoire.

Yes, pure curiosity, Jaak Panksepp calls it “seeking”, stimulated by tonic dopamine in PFC. But that’s simply fuzzy non-specific modulation, communicating that the animal is not too busy with visceral concerns. Actual input-specific determination of what to focus on is all in neocortex, pure pattern discovery to maximize predictive power. It may loop through VTA: Dopamine - Wikipedia, but it’s just an artifact of evolution, that looping doesn’t add any info. Ok, it actually does add a lot of biases, but then it’s mixed motives, not purely cognitive seeking. Science for the sake of science :).

I expect that there is a drive like being hungry or thirsty that motivates us to create a certain degree of bursting in the cortex.

Bursting doesn’t just mark something as needing attention. It also adds information. In vS1, L5 cells burst or not to precisely code a computed location [3, 4]. That involves the SOM/VIP disinhibitory circuit mentioned in the paper.

That’s still compatible with marking attention [e.g. 6], because attention might define the spatial system. The brain’s path integration is bad, so it anchors locations to distinct landmarks (or parts of objects). Different regions could develop their own reference frames by what they attend. Those could be shaped by motivations, e.g. attending faces.

He was specifically talking about neurons that match input to salient prediction (presumably apical), as in HTM. But that is supposed to happen only in those hub cells, not in “normal” neurons.

The normal neurons might be doing the opposite: combining appical error / novelty feedback with an input, as in conventional interpretation of predictive coding. They fire if significant input pattern is not expected?

I’m confused by what the author said because the hub cells activate somatostatin cells, inhibiting apical dendrites rather than recruiting activity.
In terms of the opposite thing you’re talking about, L6ct cells fit that. They reduce bursting in thalamus and they also mainly target inhibitory cells in cortex.

Apical dendrites in surrounding cells? That will have similar effect: surrounding cells won’t get a prediction, so they will only fire if there is strong basal input. Not quite the same though, prediction now is not a negative for them, so it’s an OR rather than XOR to the hub cells.
Unless apical input can be negative to the soma?

Not sure about thalamus, that seems to work on a different level / time frame.

Yes, that’s what I meant.

Unless apical input can be negative to the soma?

I don’t know, but it has a kind of weak effect in general. It probably varies, but it can produce a much larger excitatory effect once the apical dendrite (or maybe one of its segments, not sure) gets above a threshold. It wouldn’t do much for inhibition compared to that, though it still could modulate the soma.

…stimulated by tonic dopamine in PFC.

I had to smile at this, you mentioned the D-word (thinking Previc) first. The neurotransmitters are often overlooked here.

Thanks. So, because of i/o delay, the hub cells won’t immediately block prediction in surrounding cells, but they will block learning / reinforcement in apical dendrites of the latter? Which should block recognition of new predictions, so surrounding cells will mostly respond to basal input? But they have those apical dendrites for a reason, maybe to recognize some differential prediction, because their receptive field is somewhat different from the hub cells?

I think it’s hard to figure out specific mechanisms (I haven’t fully read the paper though, so anything I’m saying about it could be wrong). Hub cells aren’t the only ones which activate somatostatin cells, they just do that more than others (I think), so it’s just an indicator of their role.