Pretty sure this is happening. I am not sure what the topic is, but it’s neuroscience, not machine learning.

We had a bit of an internet failure and lost 30 minutes of this stream, but back online now. I’ll have to patch this video together and repost it later.

That would be awesome, there is a really critical part missing!

I think the answer is two part:

Without the ability to track which part of one observation correlates to a different part of a subsequent correlation, it’s not possible to build a model of the object. If not for motion sensitive cells, the neocortex would have to do a lot of temporal and spatial correlation work in order to determine how a particular set of features in observation A correlate to a different set of features in observation B. Motion sensitive cells that track moving features (that are moving either because the object moved, or because the sensor moved) are a powerful shortcut to correlated data across different observations.

One little weirdness’ of deep learning is that every picture is assessed as a whole, with its attendant needs to parse foreground and background and all of the myriad possible presentations of the same object, not even considering classes of objects.

One of the things we know about human vision is that it really only sees tiny fragments of an object at any one time; building to clusters of features. The visual scan plays an optical version of the old 20-question game to collect this sequence of features into something that stands for an object. This also offers some degree of scale invariance. While stereo vision and saccade length give some size and distance information, the relative spatial relation of the features gives object recognition.

An interesting property of this mechanism is that we have a hard time recognizing things with a novel presentation or even novel lighting.

This “sequential basket of features” concept is a key characteristic of cortex based vision. It also gives a good framework for understanding all of the senses and the need for motion and sequence in recognition.

You may wish to take what I am putting down here and go re-read the previous post and see if it puts a different light on it.

This is an example of the basket of features leading to recognition. In this case, we have to scan the entire face before we can determine the emotional content. The scanning patterns are a lower level program that follows a stereotyped pattern; when a set of features is collected recognition take place. 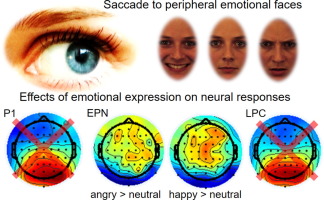 Neural Mechanisms of Overt Attention Shifts to Emotional Faces

Emotional faces draw attention and eye-movements towards them. However, the neural mechanisms of attention have mainly been investigated during fixati…

Neural Mechanisms of Overt Attention Shifts to Emotional Faces

Emotional faces draw attention and eye-movements towards them. However, the neural mechanisms of attention have mainly been investigated during fixati… 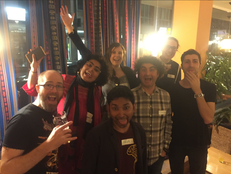 Paper online: Recent findings on " Neural Mechanisms of Overt Attention Shifts to Emotional Faces " were just published in Neuroscience. You can download the paper for free at this link:...