Before reading, it is just my opinion and I haven’t tried to find a paper about this particular topic. I would be glad to read those paper or to be criticized.

Grid cells are awesome. They have some advantage for identifying current location and so on. but, I can hardly find about ‘why’ a hexagonal grid is formed in the brain rather than other location encoding mechanism Ex) rectangular coordinate

I think, the hexagonal grid is formed because the relative distance between two dots are important and is often used in the brain.
By moving one point to another point in particular distance(for human, a good example is a one step, length of a thumb…etc) the potential location pool forms a circle. when they move again, the intersection between the two circle will start to form a hexagonal grid.
Also, to explain why hexagonal grid doesn’t regenerate every step and can form a regular representation while moving continuously and in the dark, we can use the idea about motor signal. the information about currently moving direction and speed will do.

I think, the hexagonal grid is formed because the relative distance between two dots are important and is often used in the brain.

I think the answer is very simple. It’s how equally sized bubbles, cells, particles and spheres of any kind pack together when attracted to each other on a 2D surface.

A square or rectangular spacing has wasted space between rows, which gets filled by the rows shifting one radius. This causes the rows to mesh together to become close packed, a stable geometry. Each unit then contacts 6 neighbors.

Although cortical columns can contain many cells it’s still an interconnected system that must stay together as one unit. After units close pack together there are again 6 neighbors.

This is one of my experiments:

If my understanding is correct, the triangular lattice pattern of neuron activations in the grid cell modules exist because of local inhibition effects. The set of winning/activated cells suppress the firing of their neighbors. The overlapping spheres of inhibition are what give rise to the lattice pattern. As the sensor is shifted (translated/rotated), there is a subtle change in the proximal inputs that result in a shift of the firing pattern that is proportional to the sensor shift. These same inhibitory effects then generate a similar (but shifted) lattice pattern. If after some number of these shifts, a sufficient number of the original nodes become active again, then the original lattice pattern will reestablish itself. This periodic behavior (amongst individual neurons) is perhaps what is being observed in the experiments with mice moving about their environment. (I go into a little more detail on these ideas here.)

I guess you misunderstood my point. I’m talking about grid cells, not grid of cells. I totally agree with you with how cortical columns are formed in the brain and why is it forms a hexagonal grid. But what I’m talking here is why the grid cell encodes location in hexagonal grid(I think the triangular grid is more suitable tho) this grid is what im talking here.

Also, I love your work. thanks for replying

So the grid cell firing pattern is derived by the triangular lattice-like inhibition mechanism in the internal brain? Interesting. I’ll look foreword to it

I guess you misunderstood my point. I’m talking about grid cells, not grid of cells.

I should have gone one step further and included this part of the video CollinsEM presented in another topic. In this case the equally sized units are the “doughnut of inhibitory connectivity” around the neurons.

I’m trying to find a good example to explain this kind of grid formation, but it’s not an easy one to find an example for. Best I can think of are equally powerful radio stations operating at the same frequency (by inhibition) not being allowed to interfere with the signal from neighboring stations. The “visualization of this inhibition generated pattern” that Eric Collins is working on would be useful right now!

We might have to start with this paper from October 2017 that helps show how little is known about grid field formation: 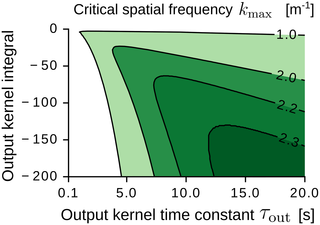 Author summary When an animal explores an environment, grid cells activate at multiple spatial locations that form a strikingly-regular triangular pattern. Grid cells are believed to support high-level cognitive functions such as navigation and...

Grid cells are neurons of the medial entorhinal cortex (mEC) tuned to the position of the animal in the environment [1, 2]. Unlike place cells, which typically fire in a single spatial location [3, 4], grid cells have multiple receptive fields that form a strikingly-regular triangular pattern in space. Since their discovery, grid cells have been the object of a great number of experimental and theoretical studies, and they are thought to support high-level cognitive functions such as self-location [e.g. 5, 6], spatial navigation [e.g. 7–9], and spatial memory [10, 11]. Nevertheless, to date, the mechanisms underlying the formation of grid spatial patterns are yet to be understood [12, 13].

The attractor-network theory proposes that grid fields could arise from a path-integrating process, where bumps of neural activity are displaced across a low-dimensional continuous attractor by self-motion cues [14–21]. The idea that self-motion inputs could drive spatial firing is motivated by the fact that mammals can use path integration for navigation [22], that speed and head-direction signals have been recorded within the mEC [23, 24], and that, in the rat [1, 25] but not in the mouse [26, 27], grid firing fields tend to persist in darkness. However, grid-cell activity may rely also on non-visual sensory inputs—such as olfactory or tactile cues—even in complete darkness [28]. Additionally, the attractor theory alone cannot explain how grid fields are anchored to the physical space, and how the properties of the grid patterns relate to the geometry of the enclosure [29–31].

A different explanation for the formation of grid-cell activity is given by the so-called oscillatory-interference models [32–36]. In those models, periodic spatial patterns are generated by the interference between multiple oscillators whose frequencies are controlled by the velocity of the animal. Speed-modulated rhythmic activity is indeed prominent throughout the hippocampal formation in rodents and primates [37–40], particularly within the theta frequency band (4-12 Hz). Additionally, reduced theta rhythmicity disrupts grid-cell firing [41, 42], and grid-cell phase precession [43] is intrinsically generated by interference models; but see [44]. Despite their theoretical appeal, however, these models cannot explain grid-cell activity in the absence of continuous theta oscillations in the bat [45], and they are inconsistent with the grid-cell membrane-potential dynamics as measured intracellularly [46, 47]; see [48] for a hybrid oscillatory-attractor model.

Here we focus on the idea that grid-cell activity does not originate from self-motion cues, but rather from a learning process driven by external sensory inputs. In particular, it was proposed that grid patterns could arise from a competition between persistent excitation by spatially-selective inputs and the reluctance of a neuron to fire for long stretches of time [49–53]. In this case, Hebbian plasticity at the input synapses could imprint a periodic pattern in the output activity of a single neuron. Spatially-selective inputs, i.e., inputs with significant spatial information, are indeed abundant within the mEC [54–56] and its afferent structures [57–61] And spike-rate adaptation, which is ubiquitous in the brain [62], could hinder neuronal firing in response to persistent excitation.