HTM only focuses on the sparse representation of neurons and simply uses binary to represent the firing of neurons.
But real nerve firing in brain is not only binary but also rate oriented(frequency is informative, not irregular).

In explaining many principles, rate coding is more convincing than SDR. such as color perception: Cone cells respond differently to light of different wavelengths. 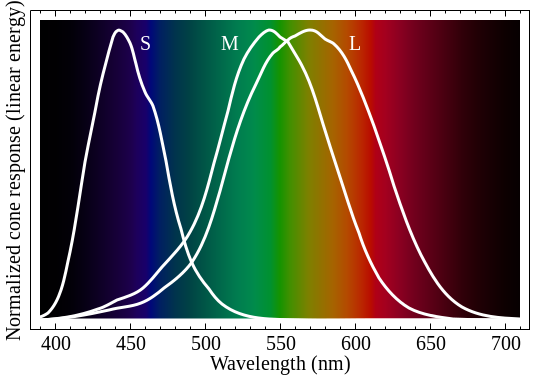 The nerve firing frequency is a scalar. Is it more appropriate to use it for calculations?

We already know that sparse coding/grid cells exist in the neural network, but rate coding cannot be ignored.
Thus, how do they collaborate?

I would like to disagree. Each photo-sensing cell in the retina only accepts one frequency of light. And according to how strong the light is and how close the poton’s frequency is to the receptor’s frequency, varying strength of signal is generated. I don’t think photo receptors encode the frequency using rate coding. But I agree that rate coding can be used to encode the strength of the signal.

IMO. From a computation standpoint, HTM IS Spiking Neural Networks without the fine grained concept of time (which includes rate coding).

What do you disagree with?
rate/frequency/spike count = strength of signal.

The frequency is a scalar. Is it more appropriate to use it for calculations?

Hmm… maybe I got something wrong.
I thought you are indicating that photo receptors are encoding frequency (of a photon) as a scalar.

The main difference is that HTM uses the sequence(changing) as the input and SNN(in this case) uses the constant(not-changing) representations as an input. If you feed in a constant representation to HTM or slowly changing sequence, You will see the rate coding appears.
It’s not rate-coding or sparse-coding, it should be both and I think HTM is doing great on that

You don’t get the point of my post. But thank you for your reply.

Retinal cells don’t spike, they output continuously, Retina is an initial encoder for HTM, a separate modality-specific algorithm. For spiking pre-synaptic neurons, I think rate would be represented by charge accumulation in post-synaptic dendrite or soma. That is, first accumulation across SDR, and accumulation over time if SDR-accumulated input is over the threshold.

SDR is mostly concerned with the spatial aspect of the cell communication.(topology) You are correct: the firing at that position is a value that contains both phase and rate coding

HTM, as currently implemented uses one aspect of the phase coding in the competition phase of the temporal portion of the algorithm.
In this forum we have discussed spike (rate) coding but mostly this is looked at as a future extension of the HTM model.

I find it curious that earlier responses to your post seem to be unaware of what a cell response in V1 looks like. (spike trains)

In this forum we have discussed spike (rate) coding but mostly this is looked at as a future extension of the HTM model.

That would be merged rates from all synapses in SDR?

Watch this and you tell me if you think rate coding has any place in visual value coding.


This is kind of basic neurology. The sound is the response from a single cell amplified and played through a speaker. Cell response is best thought of as both rate and phase coding.

The SDR fits in as the receptive nature of the dendrite to this cell. Some pattern present on the dendrite cause this pulse train. The frequency of pulses roughly varies with the degree of match.

I don’t know, does “rate” includes bursts? Then time frame should be short enough even for V1. And that time frame (accumulation before dissipation) should be increasing for higher areas.
I meant presynaptic rate.

The frequency does not accumulate with higher order maps. Rate coding sounds about the same anywhere you look in the cortex. The phase coding (leading edge) of the pulse train seems to be important in the competition phase of inhibition competition. Once the winning cell is established the rate coding comes into play to signal value.

Dendrites accumulate the equivalent of charge; they can respond to both a lot of pulses along the dendrite or fewer faster pulses.

The output of a cell varies with the degree of excitement it receives on the dendrites.

Well, the output burst frequency may be fixed, but accumulation time depends on gating on axonal hillock, maybe some other places. Is that also fixed, or maybe increasing with elevation?
Also, output time frame may increase with lateral reverberation.

Frequencies are NOT fixed.

Can you be more clear about what you might mean by elevation?
If you are referring to location in the hierarchy then no - the rate coding is a basic property of pyramidal neurons.
As you pull back and look at map-2-map communications past the primary receptive fields this basic cell response rates are harnessed on a very large scale. The interaction with the thalamus coordinates this into the large scale activity that we think of as brain waves. I have talked about in various posts on this forum.

The basic rate is about 10 Hz when the cell are driven to synchronized coding; this is the same everywhere in the cortex. As you get into the large coordinated actions there are higher frequencies such as how I believe gamma is used to mediate inhibitory interaction mechanisms.

Can you be more clear about what you might mean by elevation?
If you are referring to location in the hierarchy

Yes. I know that neurons are pretty much the same in all areas, but from what I recollect the size of ensembles is greater in association areas. Which would allow / require greater duration of lateral inhibition and reverberation. You mentioned a bunch of counter-examples, but aren’t they all in primary cortices?

Here is a textbook thing: Joaquin Fuster in Cortex & Mind, p. 73: “At the lower level, representation is highly concrete and localized, and thus highly vulnerable. Local damage leads to well-delimited sensory deficit. In unimodal association cortex, representation is more categorical and more distributed, in networks that span relatively large sections of that cortex… In transmodal areas representation is even more widely distributed… P. 82: “Thus a higher-level cognit (e.g., an abstract concept) would be represented in a wide network of association cortex…”

HTM IS Spiking Neural Networks without the fine grained concept of time (which includes rate coding).

Rate coding could add more information to HTM, but we are not actively investigating it. We think there is a whole lot you can do without rate coding.

@rhyolight
I have to remind you that this is not a question about how HTM works and what can be done with HTM. This is a “General Neuroscience” topic.
Any comment on neural coding?