I’ll just leave this here, This is all a result from introspection from a single individual so take this post and everything I say here with a very big grain of salt.

So, I suffer from visual snow and I have always observed some strange behavior from my vision that I could not explain very well but I think now I understand whats going on.

I do suspect visual snow really comes from a thalamocortical dysrhythmia but apparently there’s more, the seemingly random noise people see is not random to me. maybe because my VS is stronger than usual.

Thankfully its not that strong but if I were to exagerate what my “Visual Snow” looks like, it would be something like this, keep in mind that its not black lines but instead some kind of colorless/featureless ghostly “directional” aura that surrounds everything I see, I can only accuratelly describe it as being a very noisy vector field: 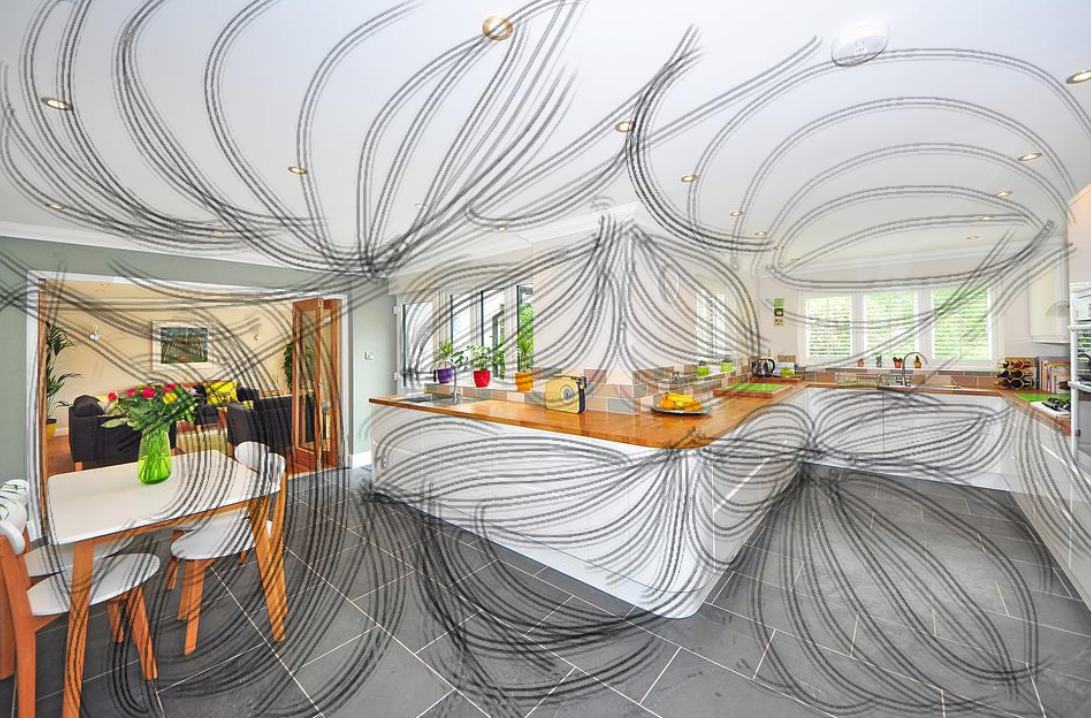 My interpretation of if is that the dysrhythmia on my thalamus causes it to not settle into one single reference frame but instead sends its input transformed via a union of reference frames, my cortex regards it as noise and tries to filter it out but some of it still gets to conscious perception.

Those reference frames anchor to salient features automatically and difuse through the topological structure of the sensor array in a way that is stable.

At least on my case, it seems this “rerefence field” gets updated about 5 times per second and morphs instantly as I focus my attention on different objects. but my cortex seems to be running at around 7 cycles per second, so the mismatched frequencies interfer and it allows me to perceive the crazy stuff going on under the hood.

I don’t understand your picture… at any given time you only perceive - clearly - a thumb at arm length of the vision field … do you see the snow at the peripheral vision also ?
Are the “snow” lines enclosed in boundaries, sharing same surfaces ?

oops, completelly forgot to blur the edges of the image. i’m not very good at image editing.

The lines dont get enclosed in boundaries, they sometimes follow them sometimes dont but they aways lock their ends at the most prominent elements of what I see and track them, specially corners of rectangles and perspective clues.

I have had visual distortion before a migraine (before the pain starts) is the color/texture of the effect similar to that?
Note: With my migraine, it was locked to a retina location rather than responding to environment

I would say its more similar to hypnogogic imagery, its very dynamic and kinof oscilates.

First time I hear of this phenomenon. Thanks for sharing this with us.
Quite interesting idea too.

Wow very interesting. I was just thinking yesterday about what it would be like to have thalamocortical disruption, as well as also basal ganglia / striatum / pallidus connectivity issues.

Do you only see these phantoms/distortions in 3D (i.e. if you were actually looking at that kitchen with your eyes) or does it occur in a 2D space too, like just an image or video of a kitchen? Are they more prominent across 3D surfaces vs 3D surfaces depicted in a 2D image/video? If they’re visible on a screen displaying a 3D scene, are they stronger/weaker based on textures (i.e. a plain solid color vs a brick wall vs a stucco wall) ?

I would imagine the disruption is between the higher levels of the visual cortex and their links to the thalamus, though it very well could be the case that there’s disruption between the thalamus and frontal cortex but I’m still trying to develop a sense of what sort of space the frontal cortex operates on - a summarized compressed form of all perception has always been my belief, but maybe just what is being focused on, where attention is focused, i.e. a surrounding room disappears when you’re focused on a video game, and does not get included in the signals being transmitted between the thalamus and frontal cortex, for instance.

The phantoms are in 2d but they seem to latch to 3d structures but I perceive it as 2d in a way. Its more visible on smooth surfaces with no texture such as a sheet of clean paper or an wall.

Its harder to notice it in busy enviroments like a place full of vegetation, though I can still see a theta frequncy oscilation.

i believe its happening at V1 but have no good way of testing that.