Is there a specific source or set of sources for the bursting phenomenon implemented in the HTM algorithm?

I was wondering if the phenomenon has been observed in the neocortex, or if it is just a feature of HTM.

Bursting is a well documented thing. In particular, the thalamus tonic and bursting modes. It is responding to cortical lack of matching and resulting non-sparse activity.

A part of the thalamus spreads that tonic activity waves across processing maps. This connects multi-map pattern forming and recall. 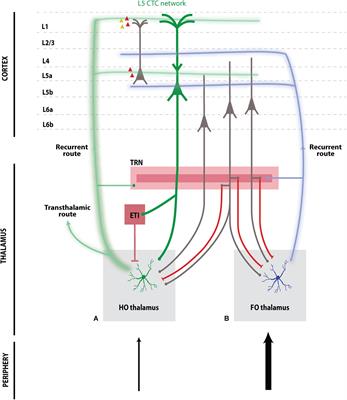 Corticothalamic Pathways From Layer 5: Emerging Roles in Computation and...

Large portions of the thalamus receive strong driving input from cortical layer 5 (L5) neurons but the role of this important pathway in cortical and thalamic computations is not well understood. L5-recipient “higher-order” thalamic regions...

My theory is that the bursts are caused by gap-junctions between pyramidal neurons, see the following article for more information about them:

Electrotonic Coupling between Pyramidal Neurons in the Neocortex General Neuroscience

Neurons want to oscillate fairly slowly due to leakage. The assembly into a larger system enables the construction of far more useful firing patterns and behaviors.

My understanding is that “bursting” here, and in the referenced paper, refers to rapid bursts of action potentials from individual neurons. “Bursting” in HTM (in the Temporal Memory algorithm) usually refers to simultaneous activation of the cells in a minicolumn (modelling a group of cortical L4 cells - pyramids or spiny stellates).

“Bursting” in HTM (in the Temporal Memory algorithm) usually refers to simultaneous activation of the cells in a minicolumn (modelling a group of cortical L4 cells - pyramids or spiny stellates).

That would lead to bursting in individual downstream neurons, connected to those multiple simultaneously spiking upstream neurons?

An interesting possibility; Stoop et al 2002 Collective bursting in layer IV: Synchronization by small thalamic inputs and recurrent connections may be referring to this:

As a new possibility, we found bursting in simulations of networks of recurrently connected, intrinsically non- bursting neurons [9]. The underlying modelling paradigm is an abstraction of the way spiny stellate neurons are embedded in layer IV of neocortex. These neurons receive feed-forward input from the thalamus and they are densely recurrently connected by excitatory synapses. Analogous to single-cell bursting, processes occurring on different time scales are responsible for network-generated bursting.

But my impression is that, other than in Numenta papers and code, “bursting” always refers to short sequences of spikes from individual neurons. (It seems unfortunate that Numenta use the term differently, even if maybe one is the cause of the other?)

Who says that the thalamus can’t be part of the bursting mechanism? There are several theoretical advantages in inclusion of the thalamus in HTM cannon. Numenta has been shy about hierarchy but if you enlarge your view to include interconnecting tracts, the role of the thalamus comes into sharp focus.

How do humans learn from raw sensory experience? Throughout life, but most obviously in infancy, we learn without explicit instruction. We propose a detailed biological mechanism for the widely-embraced idea that learning is based on the differences...