A Model of Apical Dendrites

This is an extension of the HTM model to include apical dendrites. The function of apical dendrites in pyramidal neurons is to implement the global neuronal workspace theory.

I demonstrate that the apical dendrites are capable of solving the selective attention test. The RED areas indicate what the model is paying attention to. 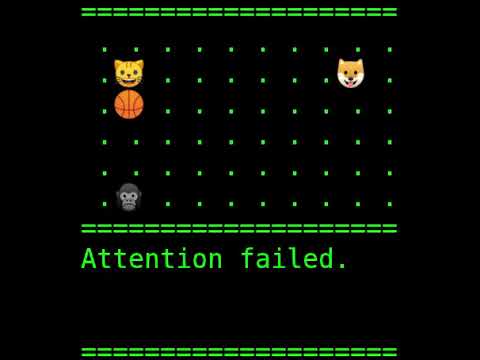 Begin with a model of a pyramidal neuron. There are several algorithms which can plausibly mimic a neuron, such as the Spatial Pooler or Temporal Memory algorithms. For this demonstration I used an encoder.

Larkum 2013. https://www.projekte.hu-berlin.de/en/larkum/research/larkum_tins_2013
This article explains the neural mechanisms inside of the apical dendrites.

“The project of relating subjective reports of conscious perception to objective behavioral and neuroscientific findings is now under way in many laboratories throughout the world. The [Global Neuronal Workspace (GNW)] hypothesis provides one possible coherent framework within which these disparate observations can be integrated.”
“According to the GNW hypothesis, conscious access proceeds in two successive phases (see also Chun and Potter 1995; Lamme and Roelfsema 2000). In a first phase, lasting from ~100 to ~300 ms, the stimulus climbs up the cortical hierarchy of processors in a primarily bottom–up and non-conscious manner. In a second phase, if the stimulus is selected for its adequacy to current goals and attention state, it is amplified in a top–down manner and becomes maintained by sustained activity of a fraction of GNW neurons, the rest being inhibited. The entire workspace is globally interconnected in such a way that only one such conscious representation can be active at any given time (see Sergent et al. 2005; Sigman and Dehaene 2005, 2008). This all-or-none invasive property distinguishes it from peripheral processors in which, due to local patterns of connections, several representations with different formats may coexist. Simulations, further detailed below, indicate that the late global phase is characterized by several unique features. These predicted “signatures” of conscious access include a sudden, late and sustained firing in GNW neurons [referred to as conscious “ignition” in Dehaene et al. (2003)], a late sensory amplification in relevant processorneurons, and an increase in high-frequency oscillations and long distance phase synchrony.”
“The state of activation of GNW neurons is assumed to be globally regulated by vigilance signals from the ascending reticular activating system [which is located in the brainstem] that are powerful enough to control major transitions between the awake state (GNW active) and slow-wave sleep (GNW inactive) states. In the resting awake state, the brain is the seat of an important ongoing metabolic activity (Gusnard and Raichle 2001). An important statement of the GNW model is that the GNW network is the seat of a particular kind of brain-scale activity state characterized by spontaneous “ignitions” similar to those that can be elicited by external stimuli, but occurring endogenously (Dehaene and Changeux 2005). A representation that has invaded the workspace may remain active in an autonomous manner and resist changes in peripheral activity. If it is negatively evaluated, or if attention fails, it may, however, be spontaneously and randomly replaced by another discrete combination of workspace neurons, thus implementing an active “generator of diversity” that constantly projects and tests hypotheses on the outside world (Dehaene and Changeux 1989, 1991, 1997). The dynamics of workspace neuron activity is thus characterized by a constant flow of individual coherent episodes of variable duration, selected by specialized reward processors.”

I’m a bit lost what counts as successful in that attention test, noticing the gorilla or not noticing it?
Or I miss its point by focusing on the gorilla?

What counts as successful is maintaining attention.
Its attention can fail in two ways:

I only wanted for this proof of concept to demonstrate the basic mechanisms of attention and the global workspace, so I made it pay attention to the objects at random.

Ok, that makes sense. Can you please explain in a few words in what way is this different from other feature tracking algorithms in computer vision? They usually do not need nor use metaphors as attention or conscience.

This differs from traditional feature tracking algorithms in that it is biologically constrained (where as traditional methods are not).

They usually do not need nor use metaphors as attention or [conscious].

Conscious attention has a very specific meaning in the global workspace literature.

You’re right. In the global workspace literature this is a called “conscious access”.