Consciousness is not what you think it is!

I believe consciousness or awareness resides in the input neurons not in the brain. Also when we visualize any scene or when we hear any music, these are happening in the input neurons. The neurons impulse travels back to the point where it got triggered, also it goes to the behind-the-scene part. Think of neuron’s impulse as water it goes as long as the water losses the water molecules, in case of neuron’s the lose of energy. 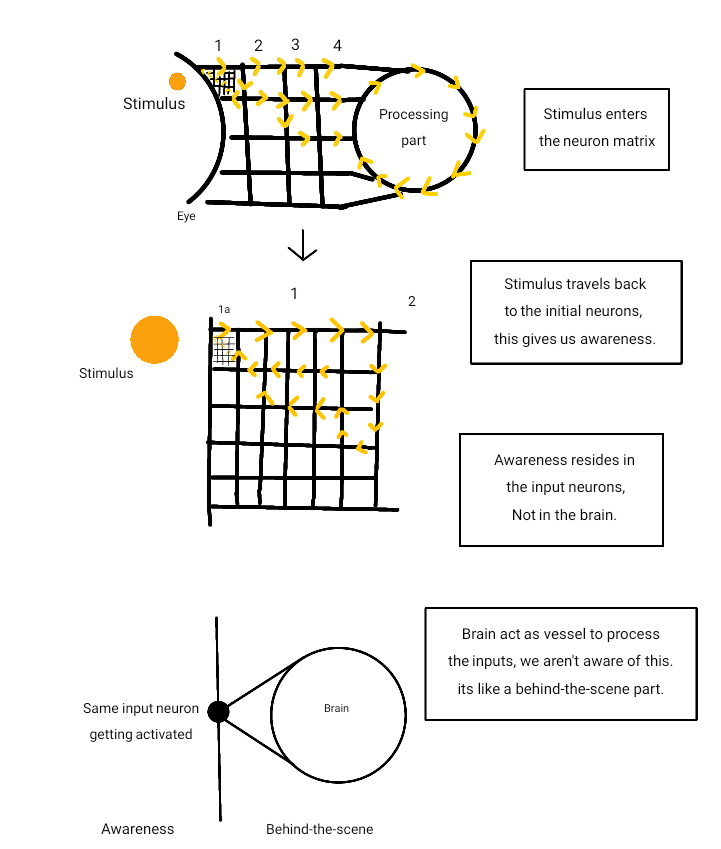 I believe consciousness or awareness resides in the input neurons not in the brain.

…and here is why we have peer review.

Belief is not science. You have a hypothesis, but no evidence, nor will you find any.

I currently believe that the illusion of consciousness is created by the same mechanisms the brain uses to construct models of the world, except this is a model of (parts of) itself. If so, there is a prospect that at some future time we shall understand how an AI can construct and use models and this may provide some evidence. Either way, this is how science is done.

Believing that the problem will be solved by the future events, is not how many great people solved the problem.

Im sorry i was a amateur… I don’t know how to use words in the science forum’s.

Allow me to help. First, consciousness is not awareness, so saying “consciousness or awareness” is nonsensical. Both of these terms are hotly debated by all of the subdisciplines of study that invoke them (philosophy, psychology, neuroscience, etc.). As such, and especially in a venue such as this (HTM Forum), you must first define what you mean by them. Once you run down that rabbit hole you will find that simple explanations such as the one you proffered are meaningless.

I think I can speak for the membership here, and not meaning to be callous, but we don’t care what you believe–we don’t care what anybody believes. What we want is evidence that proves things and at a minimum, suggests things are a certain way.

That said, naiveté is often illuminating because it stimulates looking at things differently–I found your diagrams compelling, perhaps you should better define your subject and then seek evidence to support it; i.e., you may have something here, just not what you thought.

The reason i was doing all of this is. I want to convince my brain this is not my food. I,e. How do you think we change our beliefs, thats by pure real-life experience. Eg, in workspace if i was doing the same mistakes and everyone criticizing me for what I have done, then its clear to me that i wasn’t fit for this work. If i just make memories of me doing mistakes and getting criticizing. It won’t work, so in order to change my belief i need real life experiences. Like you said ‘you are naiveté’ these things will change my belief and i will move on. Because the pain of not trying hurts more than the pain of trying.

I have pretty much the alike innate motivative, though not exactly of the same direction/domain as yours, but I think I can feel something similar.

I’d like to express some courage @Prakash: keep on following your heart and try your best!

I know you are not seeking merely for success/proud or what so over, and if you haven’t been aware, here is the fact that the founder of Numenta (Jeff Hawkins) is also the founder of Palm Inc., the company produced PDAs far before smart mobile phones became prevalent. I’d been dreaming for a Palm device back when I was a student. And you can see he did the very right thing in the very right ways, just a little ahead of the time.

I infer from this past, that Numenta would have nonetheless heavy engineering focus along the journey, it’s one of the reasons I’d like to hang around here in the HTM forum. And so I agree with @david.pfx in reply to another thread of yours:

My view on consciousness

I hate to say it, but I think you’ve stumbled into the wrong forum. … This is about science and engineering, and is not about beliefs and introspection. Those questions are best asked elsewhere.

But I hope/expect Numenta to be generous enough that philosophical discussions like this can find a place here in the HTM forum, even little community interests can arise.

I’d like to express some courage @Prakash: keep on following your heart and try your best!

Yes… you were right. I would do the stuff even if i don’t want to do… after-all i wasn’t causing harm to anyone.
Also I would like to say best of luck to your journey… And have a great day

I would add that if you move from guessing about how things work to some version of implementing, there are many that would be interested in what you learn from your experiments.

We have had many (dozens?) of people that come to this forum trying to get people interested in this or that concept on how intelligence works. I can’t recall many of them that actually coded anything to prove out their ideas.

I suspect that actual working code will attract far more attention than some ideas and a few drawings.