Later for folks on the other side of ye old worlde.

What do you want to discuss?

I know it’s just a stock photo, but this is the what I’m expecting we’ll all be doing in our minds.

It doesn’t need to be this Friday, but two topics I’d love to hear discussed at some point:

Join here. I’ll start the broadcast in about 15 minutes.

In the hangout I mentioned some papers on the lower brain structures, particularly, the hypothalamus.
These systems read the digested contents of the cortex as mostly presented by the hippocampus, processed, and output with projections to the PFC (prefrontal cortex) to select/initiate actions.
Here are some links to these older posts:

Um, I think that something was lost in the translation here. The limbic system does all the stuff I posted above all by itself. It’s functions are much older than the cortex and are vital to survival for all the “lower” lifeforms. The Papaz circuit loops in dozens of clusters of nerve bodies, each tuned up to do different things. I have mentioned the amygdala but there are other important bits and pieces involved: [5-3_NEW] Each of these bits has bunches of sub-components - for example …

I find it quite surprising that you assert that the BG is somehow a better choice for sensing body needs. The body needs --> limbic --> PFC circuits are widely documented by many sources. Some examples: Thirst: Hunger: Heat and cold (comfort seeking): Overview of all body sensing based drives: You may wish to reconsider this.

Going away from the cortex: these systems dovetail very nicely into the lowest brain structures that directly run the body. ONe that is critical is the vestibular system. This is key to standing erect and the sense that in brings into the cortex is critical to the sense of “You” in your episodic memories. What happens to “you” if it is broken?

You may wish to start with the vestibular system. I have a bunch of papers on the contributions of a stabilized platform (the vestibular system) as the starting point of self-reference - but you may wish to start with this one. What happens if it is broken? This is closely related to Depersonalization: Update: I did a little digging and ran across this text. Considering the question you are asking about the system organization of the motor system I think you will be interested in th…

And how does this all work to help make a loose bag of bones stand erect:

The sense of the body starts with the vestibular system and continues using joint angles and postures, starting with the head: http://www.physiology.org/doi/pdf/10.1152/jn.00988.2002 Look at this description of the top end of the posture and motor control system in the basal ganglia. Note that this has taps from the vestibular system not mentioned in this article: Eventually, this works through the posture system and runs down the spine which is a powerful processor in its own right: …

I bumped into this today. It seems nicely topical to your interest. This paper goes into good detail on how much of the heavy lifting is done by subcortical structures. Functional Neuroanatomy for Posture and Gait Control - Kaoru Takakusaki Running the body is insanely complicated - and something that most nubie researchers discount as a minor detail.

I would be remiss if I did not point out that as the information streams up to the thalamus and on to the cortex, there are taps off to these old brain structures. Some of these are very powerful.

It seems to be a thing for connectome/cortex researchers to ignore the processing that goes on in the “lower” brain structures. These were/are sufficient to run lizards and amphibians. There is absolutely no reason to think that they re not performing much of their original functions inside of the functioning brain. The lower brain receives a low-resolution image from the eye area “away” from the fovea and directs the eye to point at interesting areas to form identification of an object with a … 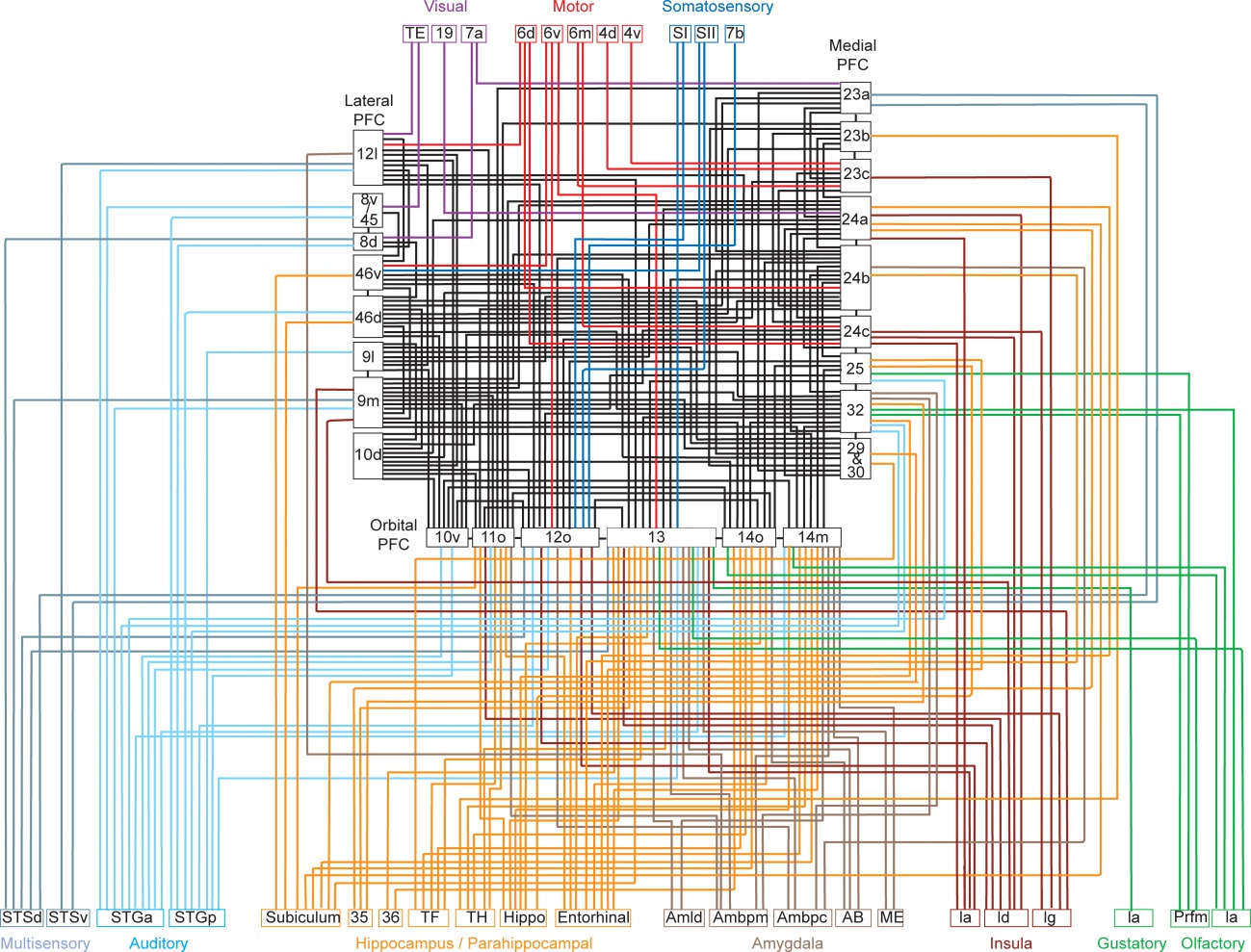 Optics meets genetics to unravel the brain: the case of sex and aggression -...

Optics meets genetics to unravel the brain: the case of sex and aggression

And this special old-brain structure:

What happens in layers 5a and 6a? General Neuroscience

I am only familiar with a limited set of critters (rat, cat, primate, corvid) in regards to the mammal and avian brains. As far as I know, this is a common layout for all of them; the limbic system is well preserved though the mammal family. While we are at it - how about the amygdala? https://www.ncbi.nlm.nih.gov/pmc/articles/PMC3755265/ @gmirey may be able to shed more light on this question. As far as “working” this is an interesting question. Patient HM lost his hippocampus afte…

Regarding @Cairo question about data pathways and my response about the parallel nature of the stream processing, these posts may be helpful:

A mini-column recognizes little part of a pattern in space, and transitions from one pattern to another in time. It is not just two letter digraph side by side but two letter digraph one after the other. This is happening in all sensory modalities at the same time. How does this fit into the overall structure of a vast sea of mini-columns to do useful things? The brain consume vast amounts of energy compared to the rest of the body. Evolution has built in some optimizations so that the populat…

To add to what I mentioned through chat: I’m primarily thinking about using some of what I have in the ID Lab for the 2D object recognition challenge. In this case my best guess is that (via hexagonally arranged minicolumn network?) the columns already have some ability to control motors for self-exploring a simple environment.

I would essentially add missing layers, using ones that need 3 axis of interconnection to get optimal 3.5/6 radiation pattern, possibly being detected in this earlier shown illustration.

In my code the reason for 3.5 is that negating received signals to derive output action results in the number of wave passing outputs alternating between 3 and 4. The back and forth jitter is in the math of the geometry. When readings temporally average together the 1 of 6 direction resolution becomes 1 of 12 or more.

A 2 axis system presents a wave generation problem that is thankfully not an issue for real (mini)columns that close pack together into a more convenient 3 axis geometry. It’s then easy to broadcast a roundish energy efficient signal outwards in directions, without signals easily returning back in the direction they came and associated signal chaos.

Although 2 axis is much easier to code the 3 axis geometry has too many advantages, so I’m back to hexagons again.

It’s possible to convert back and forth, in which case starting with the Cube coordinate system is here recommended, but in the illustration the Y is annoyingly opposite from usual screen direction and would like to reverse that:

Guide to math, algorithms, and code for hexagonal grids in games

It would be a big help for at least myself for there to be one recommended way to articulate hexagonally arranged connections and places, then convert to 2 axis floating point coordinates and back to 3 axis again. The subroutines I wrote for VB6 can do all that, but Python examples I have seen might easily be a big improvement.

@rhyolight You may want to check out this link for inspiration on Building HTM Systems. I’m in love with the layout and consistency.

@brev, do you have a link to that Postgres work you mentioned in the hangout chat? I’ve done a few searches but haven’t managed to find anything.

I started with the cube coordinate idea, but for coding reasons I ended up settling on something that seemed to work better with 2 axis RAM arrays, and with no added step as would be by shifting left every two rows to form a nice rectangle.

It’s hard for me to know how well this will work for modeling cortical columns, which may need a three coordinate system to form 3D cubes from flat triangles. I’m OK with whatever may be required, and works for everyone else.

I mentioned that the lower brain structures operate in a very different way than the regular structure of the cortex. There is an oscillation pattern that seems to whirl in circular paths when visualized in 3d. These paths are formed from inputs excited and the memory entrained. The closest ANN that I have seen is the classic Boltzmann configuration.

The olfactory system is likely to be the oldest (in an evolutionary conserved sense) of the memory systems. It is what simple critters like earthworms have to keep them alive.

Olfactory oscillations: the what, how and what for

Olfactory system oscillations play out with beautiful temporal and behavioral regularity on the oscilloscope and seem to scream ‘meaning’. Always there is the fear that, although attractive, these symbols of dynamic regularity might be ...

Olfactory system gamma oscillations: the physiological dissection of a...

Oscillatory phenomena have been a focus of dynamical systems research since the time of the classical studies on the pendulum by Galileo. Fast cortical oscillations also have a long and storied history in neurophysiology, and olfactory oscillations...

The functions are found across the animal kingdom:

Neural oscillations are ubiquitous in olfactory systems of mammals, insects and molluscs. Neurophysiological and computational investigations point to common mechanisms for gamma or odor associated oscillations across phyla (40–100 Hz in mammals, ...

We measured the spatiotemporal aspects of the odor-induced population response in the turtle olfactory bulb using a voltage-sensitive dye, RH414, and a 464-element photodiode array. In contrast with previous studies of population activity using local...

How do these oscillations get out of these networks and into the cortex?

Functional Significance of Olfactory-induced Oscillations in the Human Amygdala

Keep in mind that this is just one complex of nerves tied to the nose. There are other tied to your water, food, sexual function, day/night sleep control and so on. The hypothalamus is full of them.