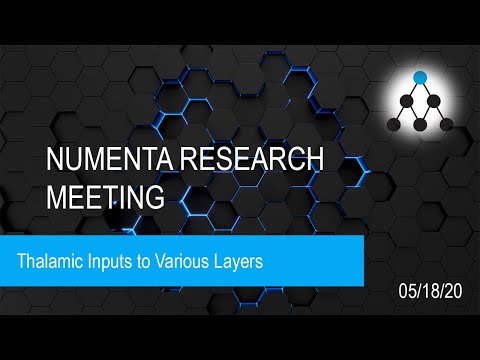 In barrel cortex, TC axons are dense in L6 (cone-shaped so sorta upper L6 and sorta barrel compartments). L6 CT cells tend to associate with one thalamic pathway and related layers, e.g. magnocellular LGN, so there’s probably a lot of differences between species and regions.

About whether the larger RFs are formed by direct input from thalamus:

For decades, neuroscientists have assumed that there is a “canonical microcircuit” in the neo cortex, in which information is transformed as excitation spreads serially along connections from thalamus, to cortical layer 4, then to layers 2/3, to...


L5 cells in barrel columns receive direct input for just 1 or two whiskers, whereas the ones in septal columns receive it directly for several whiskers.
Origins of Cortical Layer V Surround Receptive Fields in the Rat Barrel Cortex
https://journals.physiology.org/doi/full/10.1152/jn.00560.2009
1 Like
Falco May 19, 2020, 10:16am #3

Thank you so much, Numenta, for continuing to stream your research meetings.

@jhawkins in support of what you spoke about in the meeting about the direct connections from LGN to Layer 2/3 complex cells, this recent paper A segregated cortical stream for retinal direction selectivity demonstrates “a functional pathway that links retinal horizontal DS cells to area RL while bypassing L4 of V1: dLGN → V1 L2/3 → RL.”

At minute 46 @jhawkins talks about a paper @FFiebig mentioned in his 3-part review of his Cosyne 2020 visit.

Could it be this review? Florian talks about a paper by Peijia Yu et al titled Measuring and modeling a fine spatial scale clustering of orientation tuning in L2/3 of mouse V1

I can’t seem to find the paper, but in the Cosyne program book you can read the paper’s abstract on page 52 (which is page 70 in the pdf).

Thank you Numenta - both because it’s awesome to have access to this and for honoring Matt’s achievement by continuing it.

Taking a moment to think of Matt and his family. #RIP #GoodDude

Thank you for finding this. Good to hear again. What I would like is to read a paper, or even a poster, that describes this finding. Florian was not able to find either one, but perhaps one is available now.