This is a community-created and managed reference card about HTM theory and implementation for easy lookup for common information. Please add to it if you have something interesting to add.
If you see “?” and know the answer, please fill it up. 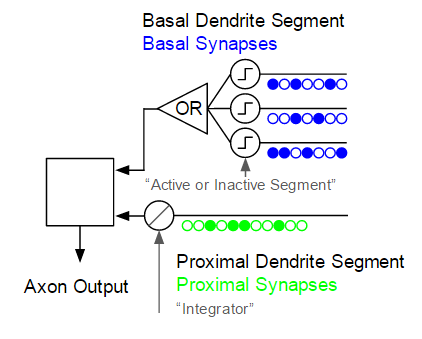 Note: need to add apical dendrites and synapses to the cell model visualization. 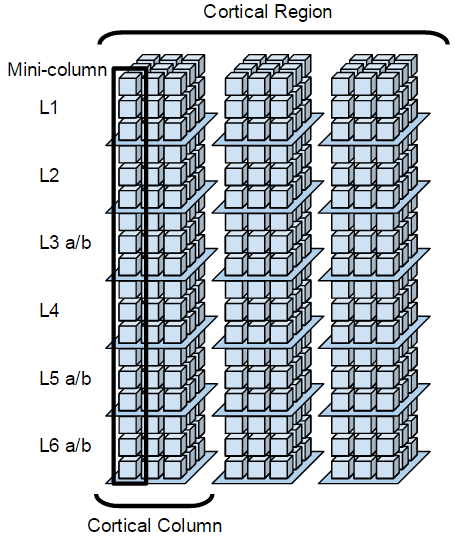 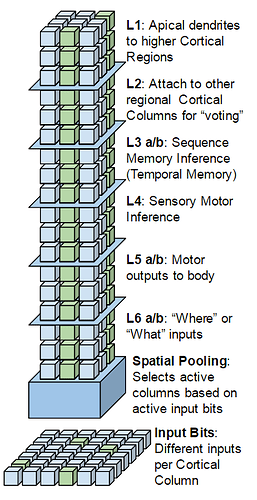 The following descriptions are, to some extent, a simplification of what the SP actually does.

See this, this and this HTM School videos for a more fluid (but still simplified) exposition of the concepts. 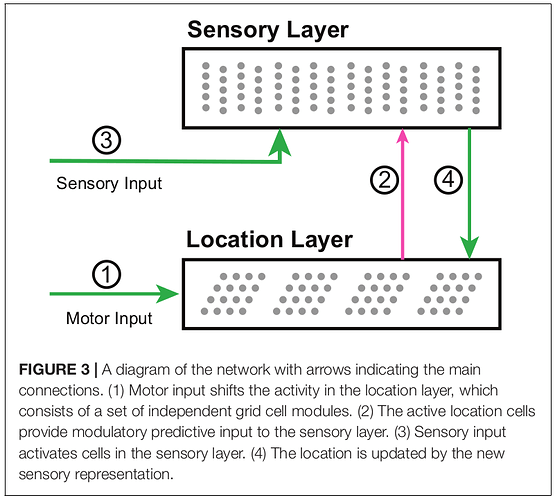 Not a bad idea… maybe we change the title of this topic to “HTM Cheat Sheet” and make it a wiki?

Good idea. It should specify

I’ve actually been working on my own HTM notes to help wrap my head around the theory. Some of it may be direct quotes from members of this forum (Jeff comes to mind). It’s still very much a WIP, but I hope some of it is of benefit to the cheat sheet! I will be updating as I go so hopefully I’ll remember to update this post, too.

@ddigiorg This is awesome! Thanks for sharing.

I suppose this is the number of synapses per segment that need to be active (= permanence exceeds threshold) for the segment to become active, correct?

Here my understanding was that the initial permanence would be a random value chosen around the threshold. Citing the SP whitepaper:

Above refers to proximal synapse initialization though, but I assume distal would be the same.

Why are 2 different increments/decrements needed? Didn’t see that in the whitepaper.

If these are the maximum values, what are the values you start with?

Also, I’d expect these values to have a relationship to the overall number of cells. So if the region has 2048*32=65k cells, the number of synapses would be defined as 0.2% of the total cell count. The reason I’m stressing this point is that in the implementation, this actually should not be a separate parameter to be set because it’s automatically derived from the column/cell count.

With ints you could always have 100 steps only but with floats the range is endless depending on how small you set the increment (learning rate).

Thanks @lindmatt! I got the HTM Implementation Parameters from the Appendix of Numenta’s Continuous online sequence learning with an unsupervised neural network model.

I suppose this is the number of synapses per segment that need to be active (= permanence exceeds threshold) for the segment to become active, correct?

Yes, Dendritic Segment Activation Threshold indicates there must be above 15 active synapses above the permanence threshold.

Here my understanding was that the initial permanence would be a random value chosen around the threshold.

I agree that the Initial Synaptic Permanance being a random value chosen around the threshold. Not sure why it wouldn’t be and I think it is actually implemented that way, but I’m not certain.

Above refers to proximal synapse initialization though, but I assume distal would be the same.

With ints you could always have 100 steps only but with floats the range is endless depending on how small you set the increment (learning rate).

True, but then again one could just use larger integers for a wider range, right? I thought ints are generally a faster representation (totally making this up and probably really embarrassing myself on a basic Comp Sci concept so I will have to research this) but I guess it doesn’t really matter in the end. It’s just a representation of bits after all.

EDIT: I should probably mention that everything I say should be taken with a grain of salt. I am still learning and it’s very possible I could be missing something. Please correct me if I’m wrong because I’d like to learn as much as possible!

Of course, both are linked, i.e. if you do start from 0 segments and 0 synapses, you don’t need to initialize any permanences.

Oops, you’re right. It’s midnight on a Friday night and my reading comprehension has been found wanting…

Time for beer. It kills the weaker brain cells first!

Ok all, I converted @mraptor’s first post to a wiki and moved @ddigiorg’s content into it as well. It is now up to you to organize the content and plan how it should be structured. Use this thread to discuss the wiki, but treat the first post as the actual wiki content.

Yes that’s right. Let me be explicit just in case I’m mistaken: a Cortical Column (a “macrocolumn” or “hypercolumn” in the biological neocortex) consists of many minicolumns. The HTM that we’re used to that has a Spatial Pooler and Temporal Memory is a model of layer 3 in a Cortical Column. In a HTM Region, many Cortical Columns are connected in parallel and “vote” on the Region’s output. It’s the Regions themselves that are hierarchical.

I definitely will need to make a better graphic to reflect this a bit more explicitly. So many things to keep in mind!

I thought it is the other way around !

I modified the graphic under the “Neocortex” heading. I think this is more clear.

In HTM per my understanding a Cortical Column has 2048 mini-columns. The Spatial Pooler selects active minicolumns across the entire CC. Temporal Memory replicates layer 3 neurons in the biological neocortex. The hierarchy comes from the connection of Cortical Regions.

I’d love to have someone from Numenta confirm or correct this.

Hey @Paul_Lamb, have you thought about updating this with more of the graphics you’ve created? You might post them here for discussion if you think they are relevant.

have you thought about updating this with more of the graphics you’ve created?

Sure, that’s probably a good way to discuss components of HTM and fact-check any assumptions. I’ll put some together to try and depict graphically where the HTM Implementation Parameters apply in the system.

Does somebody knows those numbers ?

Perhaps this paper could help:

The human brain in numbers: a linearly scaled-up primate brain

The human brain has often been viewed as outstanding among mammalian brains: the most cognitively able, the largest-than-expected from body size, endowed with an overdeveloped cerebral cortex that represents over 80% of brain mass, and purportedly...

3 posts were split to a new topic: Do minicolumns span layers?

9 posts were split to a new topic: Cell segments vs synapses

It should be noted and emphasized that some of these numbers (if not all) are (rough) estimates. For example, 86 billion of neurons in the neocortex is an estimate (as stated in the BAMI book).