So I’m trying to debug the difference in NAB score between NuPIC (as used by the NumentaTM detector) and htm.core.

In my implementation I have aligned all the model hyperparams (SP, TM & Encoders), and also used the same AnomalyLikelihood function.

In spite of this I’m still getting NAB score around 50 for htm.core, while NumentaTM is up around 65.

As I understand NumentaTM detector doesn’t using BacktrackingTM (with tmImplemetation=‘tm_cpp’), so the anomaly scores should align - though that’s not what I’m seeing.

I assumed it was due to some functionality difference in htm.core, but then saw here https://github.com/htm-community/NAB/pull/15 that @breznak and @Zbysekz you guys scored over 60 on NAB with htm.core?? If possible I’d love to check it out and find where my issue is.

Ok I got the NAB score up to like 65 by adding the spatial anomaly check (with spatial_tolerance=0.05) used in the other HTM implementations! 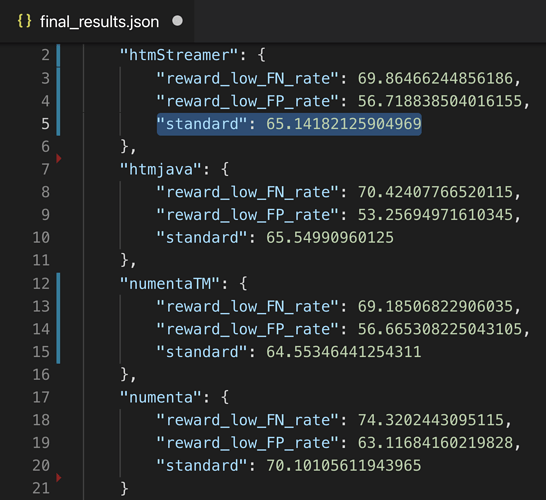 @sheiser1 congratulation.
Could you please write more detailed how you run ans setup it with htm.core so that any newcomer can learn and test it quickly?
Thanks

Hi guys,
I did some code cleanup work on some of the C++ code in htm.core but the NAB implementation was mostly @ctrl-z-9000-times and @breznak. So I cannot help you much.

Hi, I saw this topic and I am also trying to obtain a score similar to numentaTM. In which file or script should I try adding the spatial anomaly check?

In which file or script should I try adding the spatial anomaly check?

Here’s how the NumentaTM does it in NAB: 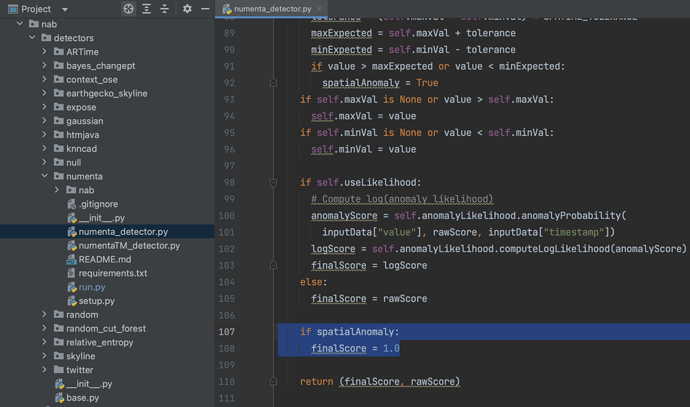 Hi! I have reviewed the code and I think that it is already considering the spatial anomaly: anomalyScore = max(spatialAnomaly, temporalAnomaly). However, I have also trying adding the conditional, but it gives a similar result (NAB standard score around 50). 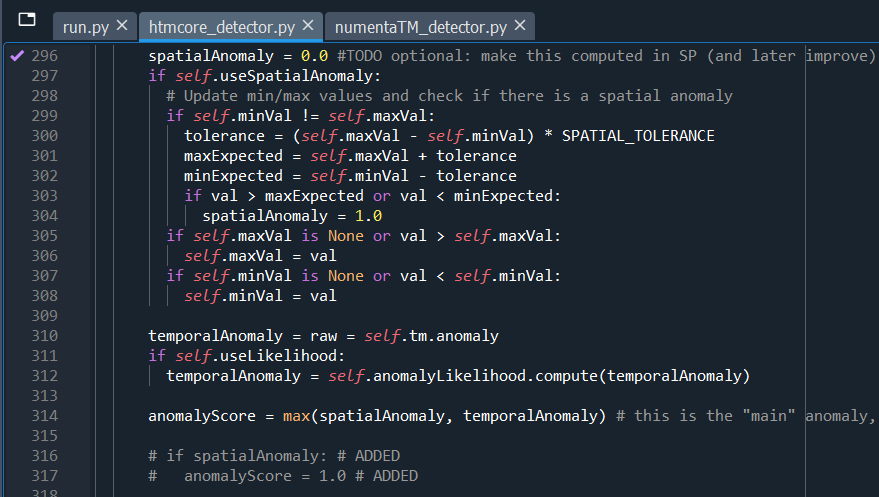 I am trying to figure out if there is another reason that makes me obtain a htmcore NAB score around 50. For the htmcore_detector I have the parameters hardcoded, should I use the same that it uses for numentaTM or htmjava? How could I make it?

should I use the same that it uses for numentaTM or htmjava? How could I make it?

Yes I’d say so.
I’d be kinda surprised if the hyperparams alone raises your NAB score that much, but here are the params the numentaTM detector uses.

Sigh, I may have screwed this by rewriting the anomaly likelihood code…
The original code from numenta was a hot mess full of heuristics and hardcoded thresholds so I replaced it with a simple and understandable method which is both well grounded in statistical theory and in numenta’s notes on the topic (but not ofc their source code).