Here is a biologically plausible hypothesis on how a reward transmitting a signal received by output axon synapses might be slowly (back)propagated to input synapses.

More exactly put,
If A → B → C is a chain of three connected neurons, this mechanism by which when neuron C fails to respond to activations of A followed B , it could result in weakening not only the B->C synapse but also the A->B one.
Premises:

And here-s the logic following the above:

It makes sense to have the neurons compete for the limited energy budget which regulates not only individual synapse strength but the whole neuron strength too.

Assume there is some expensive spice available only immediately after and in the close proximity of the depolarized membrane which can enter back the axon synapses:

Probably (or likely) this isn’t the exact mechanism but it is fairly plausible that when the two conditions above met, a chemical change has to happen within the axon button in order to inform it has succeeded or not in transmitting the signal in order to alter synapse strength/permanence.

I called it spice since for now is science-fictional, it’s expensive and for that reason can be used as a biochemical currency which :

There can be a more complex equilibrium because on average the neurons have as many output synapses as inputs, so a general threshold of downstream activations would keep the supplies of spice safe, while a response below the threshold resulting from persistent activation of upstream neurons could result depleting strength in specific dendrites that were most active in the past seconds or minutes.

I know, it is far fetched, as you noticed I don’t really know much about biochemistry or neurology (hence the "spice term) but here you have it.

I read about sodium/potassium channels all along the membrane, needed for action potential to trigger and travel, maybe, just maybe, some molecules can plug and/or other can unplug some of these channels, influencing locally how well or fast the postsynaptic membrane responds to input signals, and availability of these molecules could be influenced, with a delay, by what happened at the axon end of the cell.

Chemical transfers along the dendrites outer surface occur in the reverse direction to the firing electrical signal…
The conveyor effect then relies on the destination to release the chemicals to back prop along the axion in reverse. 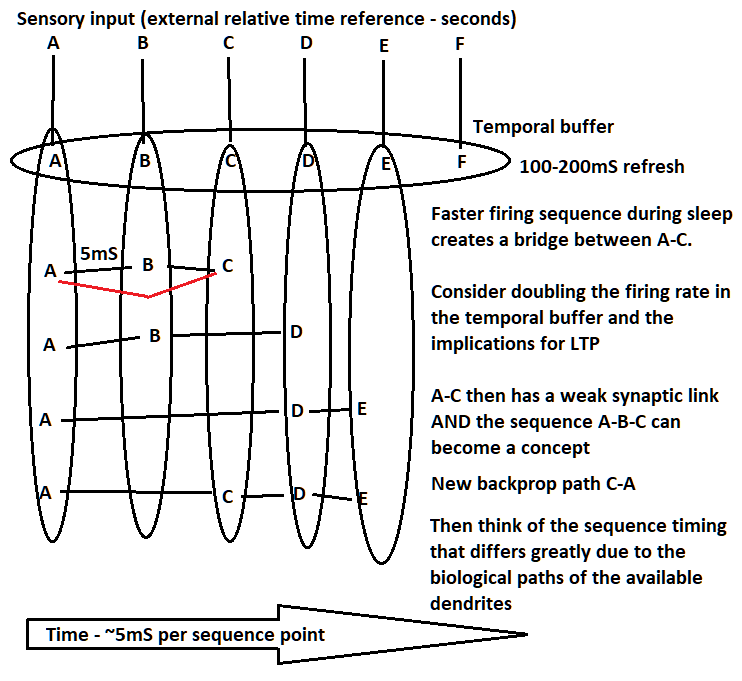 This is part of what I think your spice concept is and a route to allow bridging of points in a sequence ?

Axons transport proteins gradually. Wikipedia’s axonal transport article says at fastest, it’s 400 mm per day, which is about 200 milliseconds per micrometer. For scale, minicolumns are like 50 micrometers apart and neurons spike like once per 50 milliseconds, so communicating like that takes like 200 spike intervals. Dunno if that’s useful.

I don’t know either, but that info is very interesting, thanks.

If we hold a thought (attention pool) for a few seconds with Theta waves at 7Hz (143mS refresh rate) those 200 spikes would then take only 28 seconds…or about the duration of short term memory.

It doesn’t matter how fast they’re spiking. That was just for scale, to put it in context of learning on a spike-by-spike basis.

It could send proteins around, because proteins can do pretty much anything, but it’d mean you need some sort of longer term learning (seconds rather than milliseconds, at least) because it has a lot of latency.

It could send proteins around, because proteins can do pretty much anything, but it’d mean you need some sort of longer term learning (seconds rather than milliseconds, at least) because it has a lot of latency.

Proteins? Probably not, the only way they interact is by shape, a lock for every key. Small-ish polypeptides are a possibility. But nucleotides/DNA/RNA are a better prospect: the cell already has mechanisms to read them by sequence, so lots of possibilities.

Proteins get sent around. It’s not just a possibility. That’s how researchers do retrograde tracing, where they’re asking what parts of the brain sends signals to a certain part of the brain.

The rabies virus hijacks a slow transport system which basically walks backwards along the axon to the cell body (protein legs). We hijack the virus to do retrograde tracing by removing its ability to cross multiple synapses and adding something to its genetic code which e.g. glows green when exposed to light. Or something like that, I’m not an expert at all. Axonal transport, also called axoplasmic transport or axoplasmic flow, is a cellular process responsible for movement of mitochondria, lipids, synaptic vesicles, proteins, and other organelles to and from a neuron's cell body, through the cytoplasm of its axon called the axoplasm. Since some axons are on the order of meters long, neurons cannot rely on diffusion to carry products of the nucleus and organelles to the end of their axons. Axonal transport is also responsible for moving molecules Mo...

Retrograde tracing is a research method used in neuroscience to trace neural connections from their point of termination (the synapse) to their source (the cell body). Retrograde tracing techniques allow for detailed assessment of neuronal connections between a target population of neurons and their inputs throughout the nervous system. These techniques allow the "mapping" of connections between neurons in a particular structure (e.g. the eye) and the target neurons in the brain. The opposite tec...

No, polypeptides include proteins. To be called a protein a polypeptide needs to have at least 50 peptides and a 3D shape. Basic biochem 101.

Oligopeptides are already known to have signalling/hormone-like activity, and are involved in cell to cell communication.

Yes, proteins may be transported but they don’t signal as far as I know.

" Specifically, synaptotagmin-IV (syt-IV) immunoprecipitates with KIF1A (ref. 21), regulates synaptic function and long-term potentiation (LTP), and is a negative regulator of BDNF-induced exocytosis in neurons22. Therefore, we determined whether KIF1A and syt-IV act as a motor–cargo pair that is transported along newly polymerized MTs directly into spines."

Given these are part of the mechanisms for LTP and LTD and they are transpors along the network, the key part with certain backprop characteristics is the ability to potentially bridge nodes, which sleep timing LTP bridging of paris may achieve (sleep spike frequency brings the timing of the network in - but it would need a parallel excitory layer for wave propogation). Scans of sleep waves (wave behaviour observed in vivo) that travel in any and all directions in uniform waves would also provide plausibility to this mechanism, but still missing parts…

The paper above is one of a few that cover different aspects.

Just my guess at adding things together and not necessarily understanding all the parts in detail so may well be 1+1=3.