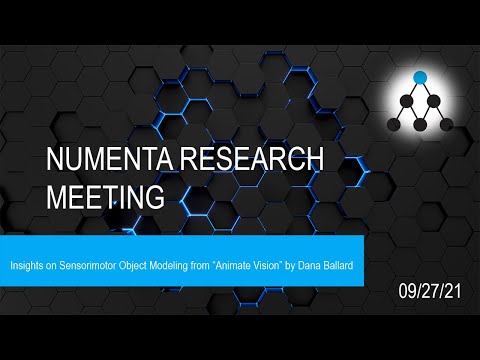 Marcus Lewis reviews a few papers from Dana Ballard and highlights some insights related to object modeling and reference frames in the Thousand Brains Theory.

Marcus first gives an overview of what “animate vision” is, as outlined in Ballard’s papers, and defines optic flow. Marcus then makes a case for using a world-centric, viewer-oriented location relative to a fixation point to represent objects and depth.

In the second part of his presentation, he looks at Numenta’s previous sensorimotor research (where the motor command is being received by the system) and Ballard’s sensorimotor “animate vision” system (where the motor command is being generated by the system) for objecting modeling. He evaluates whether the two sensorimotor frameworks will lead to different object modeling solutions and discusses the opportunities that could stem from Ballard’s framework.