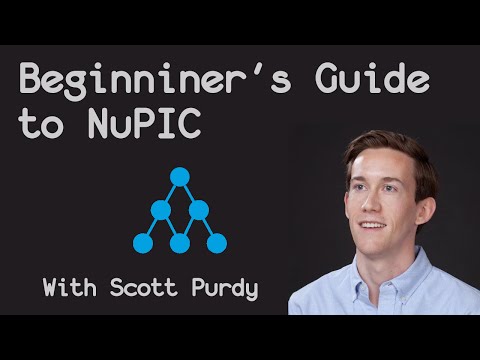 A detailed introduction to the components of NuPIC. Includes encoders, the spatial pooler, and swarming. Contains live code running in an iPython Notebook, which is included as a reference.

The “hot gym” sample application has been around for a long time, and was one of the first real-world applications of NuPIC that actually worked. The data used is real energy consumption data from a gym in Australia. It is aggregated hourly already, so the input CSV file simply contains a timestamp and float value for energy consumption during that hour.

This tutorial shows how to take that data file, create a swarm to find the best NuPIC Model parameters, then use those Model parameters to create a NuPIC Model and feed the data into it, getting 1-step-ahead predictions for each row of data being fed into NuPIC. Essentially, this example shows how NuPIC can predict the energy consumption of a building one hour into the future.

Following where the One Hot Gym Prediction Tutorial leaves off, this screencast and example app shows you how to convert to an anomaly detection model using the same data set.

A walkthrough of the HTM Engine, which allows users to create and run hundreds of anomaly detection NuPIC models simultaneously, with an example application of New York City live traffic speeds.

Subutai Ahmad put together a set of examples. They demonstrate swarming for prediction and anomaly detection models. The example shows how to use swarming to select between multiple fields and the effect of noise. It uses the same sine wave dataset used in the sine wave tutorial above.

There are a myriad of free online data sets that could be processed and used as input for NuPIC models.

5 Likes
Getting Started with NuPIC
Could someone help to run NuPic
Getting started with HTM with some simple examples
NuPIC Wiki is being deprecated
benbastaki September 21, 2018, 9:25pm #2

I have 2 questions if you can help with please.

1. What version of nupic API we should use for the reference and use. There is 1.0.6.dev0, Stable or prerelease version…?
I noticed there are some differences in suggestion with parameter’s default value but which one is most reliable version to use please?

Use stable. Use NAB model params for anomaly detection. Use the NuPIC python api not the C++ api.

Hello,
May you have the NuPIC API Docs/NuPIC Core API Docs in pdf format?
Thanks,
M

Sorry @Moti I don’t have the API docs in PDF (neither to most software APIs).

Thanks for your wonderful work,

You can generate the docs and output to pdf if you like, download the source from github and run (completely untested):